Thanks to Senile Team, they are offering to The Bit Station customers the Intrepid Izzy Collector’s Edition previously exclusive to the Kickstarter campaign. Secure your pre-order before November 12th, 2021.

**This edition does not include the US and PAL bonus covers** 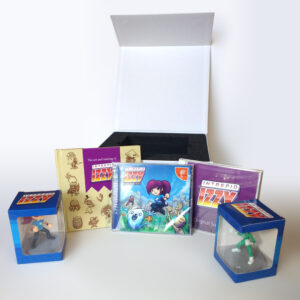 Intrepid Izzy combines platforming, beat ’em up and adventure elements to create a unique experience with depth, character and above all, fun!

Senile Team is an independent game developer, who achieved instant fame in 2003 with the surprise hit Beats of Rage. This moddable, open source engine was ported to over a dozen platforms and sparked the revival of the scrolling beat ’em up genre with over 100 community-developed mods. Beats of Rage was followed by Senile Team’s first commercially released game, Rush Rush Rally Racing, released for Dreamcast and WiiWare in 2009. With their continuing love of the 16-bit era, Senile Team’s goal is to create new and original games inspired by the classics. We at The Bit Station loves working with Senile Team and are always fans of their games. We are honored to continue to support them in all their current and future projects.